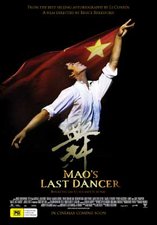 The plot of Mao’s Last Dancer is based on the autobiography by Chinese-born ballet dancer Li Cunxin, who following in the footsteps of such artists as Rudolph Nureyev and Mikhail Baryshnikov, defected to the U.S. in 1981. However, the story of the movie begins in medias res, with a 20-year old Li stepping foot onto American soil at the beginning of a student exchange program which places him deep in the heart of Texas, with the Houston Ballet.

I was a little confused by the first few opening scenes because it felt to me that perhaps there was a bit too much medias-ing going on as out of the entire entourage who met Li (played by Chi Cao as an adult) at the airport, the only person whose role I was certain of was Bruce Greenwood as Houston Ballet director Ben Stevenson; the other characters felt like random white people to me because I wasn’t certain of their names or connection to Li. Thankfully, names and relationships began solidifying as the story then flashed back to Li’s youth and his introduction to the Beijing Dance Academy (where Li is played first as a child by Wen Bin Huang and then Birmingham Royal Ballet dancer Chengwu Guo as a teen) to help to fill in the pieces we’re missing. These flashbacks are intercut with the action in the present as Li becomes more acclimated to American culture and as his romance with fellow dancer Elizabeth Mackey (played by Amanda Schull, whom you may remember as Jody from Center Stage) deepens, so does his renown with the company and resolve to stay in the U.S.

These true events of which contemporary Houstonians recall with pride took place when I was 4, and it’s something I don’t remember my parents ever speaking about with their adult friends. As a result, I was fascinated with the story of the political drama but found myself most drawn to Li’s transformation from village peasant to into dedicated dancer. It doesn’t hurt that he is inspired by two of his teachers, one of whom inspires by exposing him to contraband film of Baryshnikov’s work and the other who inspires by sparking his sense of pride and duty. You can’t have a biographical dance movie without some sort of training montage, and I hope that I’m not exposing a bias when I say that I’m glad that it looked as serious as the kind of training montage you’d see in a kung fu movie.

Australian director Bruce Beresford (Driving Miss Daisy) and screenwriter Jan Sardi (The Notebook) are to be commended for their adaptation of Cunxin’s book, treating all the major and minor players in this drama with an even hand. Even the Communist Party members who are only toeing the line are depicted fairly and it’s a testament to the strength of the story and the movie that even without clear villains it’s still a story that’s as riveting now as it was back then. Other critics have complained that there’s not enough political drama, but I really don’t think that was the point of the movie, and especially of a story like this. It’s all about the dancing, and I’m so glad that they spent so much time on that part of Cunxin’s story.

Ultimately, though, the movie does suffer from the same problem that all book adaptations do; even with a 117 minute running time, the movie only skims the surface of what is such an engaging story and narrative that the book was named the “Book of the Year” when it was released in 2003. Still, it’s worth seeing for the great performances and an education in what life was like before you were likely born.

Available in U.S. theaters on August 20, Mao’s Last Dancer is proof-positive that white chicks love a man who can dance. And wear tight tights.