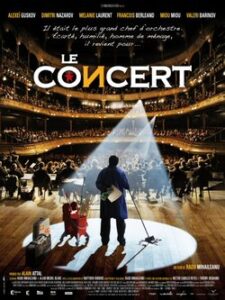 On Midsummer Eve, I was walking through a park in Brooklyn with some friends on our way to get some artisanal ice cream. As we neared the park’s exit, the unmistakable sound of a piano wafted towards us in the summer air.

There at the crux of two paths stood an upright piano, and a bushy-haired hipster was coaxing out a very familiar classical tune. No, not Für Elise or the Moonlight Sonata, but Chopin’s Nocturne in E flat (or Op.9 No.2 for the musical geeks). A crowd had formed, and everyone applauded with verve as the final notes died away, the pianist acknowledging the applause briefly before melting back into the crowd. A friend who was visiting from L.A. said later that it had been the fourth time that day he had encountered spontaneous music that day coming from people who weren’t busking.

It’s that idea of making music for the pure joy of making music or the beauty of it that permeates every frame within Le Concert, and I’m afraid that if you don’t understand that, you’re definitely not going to understand or like this movie. END_OF_DOCUMENT_TOKEN_TO_BE_REPLACED