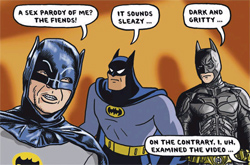 However, what I really wanted to link you to is this oh-so-clever review of the film done in comic-strip form by by Ward Sutton, mostly because he manages to take every visual incarnation of Batman there ever was (including the LEGO version) and put them all into one strip. That takes a lot of artistic talent, and reminds me of the Batman: TAS episode called “Legends of the Dark Knight” (yes, the one with the poke-in-the-eye for Joel Schumacher), which did the same thing, but animated (they stuck to Dick Sprang and Frank Miller’s work).