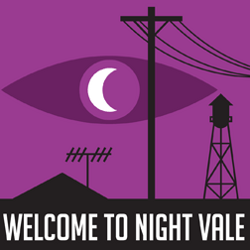 Coming as late as I did to the “Welcome to Night Vale” party train, a solid year or so of binge-listening has made me a fervent fan. Described by many as “The Prairie Home Companion” crossed with “The Twilight Zone,” the twice-monthly podcast added a live show element a year after its debut. I had never had the chance to see one of the live shows before, but even without that extra preparation I was super-excited to see the show last night at the State Theater in Minneapolis, Minn.

This doesn’t mean that someone who has never heard any episode of “Welcome to Night Vale” before won’t enjoy the live show. Writers Joseph Fink and Jeffrey Cranor’s script for the “Ghost Stories” tour is light on the in-jokes while still being true to the characters who appear. But first, let’s talk about “the weather.”

Opening the show and playing a musical interlude right at the climax of the show, Austin, Texas-based singer-songwriters Danny Schmidt and Carrie Elkin played three or four songs which showcased their talents very well. Of the duo, I was more impressed with Elkin’s voice than with Schmidt’s; however, the two complemented each other greatly as they took turns leading their songs. Schmidt’s “Standard Deviation” earned the most enthusiastic crowd response, but because I had difficulty hearing the lyrics, the cleverness of the song was lost on me. They were selling a small EP of the songs they played for the tour which cost $5 with the purchase of one of their CDs, free if you bought more than one. I chose Elkin’s Call it My Garden CD and was surprised and pleased to learn that it was produced by Red House Records from St. Paul, Minn. Schmidt’s work has been featured on “Night Vale” before (in the eighth episode called “The Lights in Radon Canyon”), and I thought the duo’s acoustic guitars and dreamy vocals really helped prime the audience for the mood of the show.

The premise of the episode for this tour is that the Night Vale City Council is holding a regular contest where every citizen tells a ghost story and the winner gets to be turned into a ghost. We got to hear ghost stories from teen anarchist and bibliophile Tamika Flynn (Symphony Sanders), a sentient patch of haze named Deb (Meg Bashwinner, whose Minnesota-tinged accent was just perfect in this audience, donchaknow?) and a computer programmer named Melony Pennington (Molly Quinn). Of the guest appearances, I loved Quinn’s performance the most because she filled her character with the right combination of cynicism and pragmatism which I’ve come to find is a hallmark of every person who works extensively with computers. Each of the little stories pulled you in and then pulled you back out again with the characteristic “Night Vale”-ish twist that even a casual listener of the show can understand.

It was radio host Cecil Palmer’s ghost story offering which drove most of the show, though. Told brilliantly by actor Cecil Baldwin, it was frequently interrupted by the other segments of the show right at climactic moments in the way that all the best radio shows used to do. There’s a quality to Baldwin’s voice which makes it hard not to listen to him and be drawn into everything that he’s saying. And as for the Night Vale-ish twist…? Well, suffice to say that it not only deepened the Cecil character more but it also transcended the story to become a universal truth for everyone who has ever encountered a ghost in their past or present.

The other regular parts of the show such as the “Community Calendar” section or the horoscopes were fine and garnered the right amounts of laughter and whooping (especially when audience members responded to Palmer calling out their horoscope sign), but in contrast to the main story and especially after the ending they seem unimportant. Half a day after show, I distinctly remember what Palmer’s voice sounded like when he got to the denouement of his ghost story more than when he announced what was in store for all the Virgos like me.

All in all, I’m very glad that I got to see this production and I hope that as the tour makes its way along the East Coast, to the West Coast and through Europe you get a chance to see it too.

4 thoughts on “You Had to Be There: “Welcome to Night Vale – Ghost Stories” (spoiler-free!)”