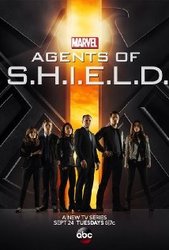 Having missed all of the pre-show hype at Comic Con in San Diego and other places completely, I went into the episode blind to most of what the rest of the Internet has already known about the series: Agent Phil Coulson would be returning from his movie death in The Avengers to lead a team of non-super-powered humans from within the S.H.I.E.L.D. organization. I didn’t know exactly how they were going to pull off the Coulson-reveal, but I have to admit the way it was scripted and the way Gregg delivered it, I couldn’t have asked for more. And a bit reminiscent of the unsettling nature of Cabin in the Woods and “Dollhouse,” just when the audience could sit back and bask in his triumphant return, Ron Glass’s generic S.H.I.E.L.D. doctor character revealed that there’s even something sinister involved with Coulson’s return to active duty. (Please let it not be Mister Sinister?)

As far as the first episode goes, the formula for the ongoing series seems fairly simple: S.H.I.E.L.D. gets wind that someone is exhibiting supernatural powers, Coulson’s team goes in to investigate, something goes wrong, the team saves the day. It’s a formula which works for many a mystery novel and has worked for cop dramas since those things were invented; as any fan of these knows, it’s the characters doing the investigating which keep viewers and readers coming back for more.

Obviously, Clark Gregg as Phil Coulson is the top draw, but what about the rest of the team? Here are my impressions of them in no particular order:

Brett Dalton plays Grant Ward, a covert ops agent who is assigned to work on Coulson’s new team. It was hard to tell from the debriefing session between Ward and Agent Maria Hill (Cobie Smulders, reprising her role from the movie) whether or not he was a particularly good agent because while he did get the job done in an action-filled sequence near the beginning of the movie, you could have plugged another competent agent into that job due to the nifty gadgets he used and the end result would have been the same. The character flaw that he’s given is that he has “poopy” people skills; that’s probably why he works alone so often. (Also, he’s supposed to have combat skills on the same level as Natasha Romanov? I don’t buy that for one second.) I don’t think it’s Dalton’s fault that I didn’t like Grant Ward; I’m going to have to blame Joss Whedon and his two co-writers (and family members) Marissa Tancharoen and Jed Whedon for not giving him enough pleasant things to do. At one point, though, I did feel a lot of empathy for Ward, and that was when he was being reverse-interrogated by Skye.

Ah yes, Skye. Played by Chloe Bennet, Skye is a social anarchist, a hacker, and currently not a favorite character of mine. Perhaps I’ve been watching too many “NCIS” or “Criminal Minds” reruns, but when I think of competent hackers and other “Fuck the system, man!” character-types, I don’t picture a woman who looks like Skye. I think that the character might have rung a bit more true with me if she’d been styled to be a bit more plain (hoodie, T-shirt and jeans as opposed to stylish preppie clothing) so that she could later surprise me with her brilliance the same way Miracle Laurie did at the end of the Dollhouse episode “Man on the Street.” I also had a lot of difficulty believing that Skye had enough skill to break into a secured S.H.I.E.L.D. communications line; then again, hacker groups have been breaking into lots of supposedly secure systems left and right these days, so perhaps I should go a little easy on her.

The technology team consists of Leo Fitz (Iain De Caestecker) and Elizabeth Henstridge (Jemma Simmons), who are introduced together. He handles all things mechanical, she all things biological and together their characters fill the roles of both a forensics team and a Q-like quartermaster in one. I’m pleased to note that both actors are from the UK; hence, any ardent cries of “Their accents are so fake!” can be met with equally ardent defenses. In the few scenes they had to show off their characters’ strengths, it’s revealed that Simmons has the cooler head among the two, but Fitz has more genius under pressure as it’s he who’s able to come up with the magical cure to guest star J. August Richards’s “exploding head” problem.

Finally, rounding out the group is Agent Melinda May (Ming-Na Wen) who is pulled out of a self-imposed, mind-numbing clerical job and back into action as the team’s pilot. (Did I mention their command center is a gigantic plane? Just checking.) There’s a lot of juicy background to her character as even hot shot Ward is dismayed (or astounded) that they were able to get her to be on the team. I’m actually pretty glad to see that the “One They Pull Out of Retirement” is a woman this time, and Wen embodies the role just perfectly.

As far as pilot episodes go, the plot and story arcs that were introduced were both standard and unique, sometimes at the same time. For example, J. August Richard’s character is first seen as a hero, but then as the investigation proceeds, he becomes the antagonist. A scene with the “innocent bystander” he saved swings him back around into “good guy” territory again, his rampage through Union Station with the captive Skye in tow has him doing another heel-face turn. And by the end, you’re not entirely sure whether or not to agree with Ward’s proposal to kill him with sniper fire or Coulson’s assertion that he needs to be saved. Considering that many of us live in countries who have decided that personal freedoms can be overridden in the name of “national security,” this kind of flexible thinking and plotting is a refreshing change from shows where the line between protagonist and antagonist are never crossed or blurred.

There’s one major problem I have with the plot, and it revolves around Phil Coulson. In the debriefing scene, Maria Hill tells Grant Ward that because the Avengers only have Level 6 security clearance, they haven’t been told about Coulson’s return. I take this to mean that any information about Coulson being alive is going to be severely restricted. At the same time, however, the final standoff between Coulson and Richards’ character takes place in the middle of a busy Union Station. And while I understand that S.H.I.E.L.D. would have cordoned off the area and evacuated all the civilians, when the camera pulls back a little, two civilians can be seen on the second level, watching the scene. And who’s to say that they won’t tell their friends about the Man in Black they saw?

So was this a perfect pilot? Heavens, no. Is there enough to make one want to continue watching it? Perhaps, and for me it entirely depends on how the characters are developed further.

Which means that even though he’s surely capable of doing it, Phil Coulson definitely can’t save this situation on his own.

“Marvel’s Agents of S.H.I.E.L.D.” airs on ABC channels at 8 pm Eastern/7 pm Central if you have cable TV; if you don’t you can see full episodes (with commercials) on the ABC website and on Hulu.