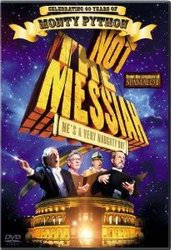 Not the Messiah: He’s a Very Naughty Boy

When I first heard that they were going to be turning Monty Python and the Holy Grail into a Broadway musical, my immediate reaction was to scoff and wonder which idiot it was who thought it up. Imagine my chagrin when I learned that the “idiot” was original Monty Python cast member Eric Idle, he who was responsible for writing and performing many of their more popular songs, including “Always Look on the Bright Side of Life” and (my favorite)“Penis Song (Not the Noel Coward Song).”

I never got to see Spamalot in its original run, but considering that it was nominated for 14 Tony Awards, won the Best Musical Award in 2005, and got some very good reviews, you can imagine why I didn’t hesitate to press play when I learned that the performance of an oratorio written by Idle and John Du Prez, his Spamalot collaborator, was streaming on Netflix.

Based on Monty Python’s Life of Brian and called “Not the Messiah: He’s a Very Naughty Boy,” this particular production was filmed at the Royal Albert Hall as part of the 40th anniversary celebration of the creation of the TV series. For those of you who aren’t British or Anglophiles but are Doctor Who fans, you’ll know this place as the one where they held a two different concerts featuring music from the series and featured an original video in 2008 starring 10th Doctor David Tennant and hosted by Matt Smith (the 11th Doctor), Karen Gillan (Amy Pond), and Arthur Darvill (Rory Williams) in 2010. END_OF_DOCUMENT_TOKEN_TO_BE_REPLACED