My reaction when I feel backed into corner is to be an asshole. It’s essentially how I defend myself. It’s been that way since was in elementary school. I’m 36 now. Maybe it’s finally time to try and let some of that shit go.
—Mike Krahulik, explaining how he reacts to criticism on Twitter.

When I first heard that Penny Arcade creator and artist Mike Krahulik had stated at the recent PAX Prime during a Q & A panel led by president Robert Khoo that it was a “mistake” for them to pull the “Team Dickwolves” T-shirts from their store, I was shocked, but not surprised.

If you haven’t seen the remarks in context yet, press play on the video below, fast-forwarding to about 22:09 minutes in:

Khoo has just asked founders/creators Krahulik and co-founder/writer Jerry Holkins if there were any mistakes that they think that Khoo has made as their business manager. Here’s a transcript of Krahulik’s prompt, out-of-the gate reply:

Mike Krahulik: You know that I don’t hold grudges. I can be incredibly mad, and then fine the next minute as long as I get it out. And I feel like we got this out, so I’m not mad about it anymore. But I think that pulling the Dickwolves merchandise was a mistake.
[Loud applause, with some hoots and hollers]
Robert Khoo: Clearly had I known the following steps that would follow after that move, I would have never brought it up to you. Of course I wouldn’t have because I did not know— I don’t want to say, “Alright, well… because of this, this happened, and people said this, I said this, you said that….” Clearly it would have been better to just be like to not say anything, and that’s sort of our policy on all these types of things now.
Krahulik: Now, yeah.
Khoo: Whereas it’s just better not to engage, and in fact pulling it was a way of engaging.
[Mike expresses agreement]
Random Audience Member: Bring it back!
Khoo: No, that’s a terrible idea.

In all the interviews I’ve seen of Robert Khoo, all the “Khoo & A” footage I’ve seen, I don’t think I’ve ever seen him this incoherent when it comes to an explanation for a business decision; Khoo clarified later to Kotaku what he meant:

It wasn’t meant to be a comment supporting rape or sexual assault, but rather one about censorship and the shirt-pulling pouring gasoline on a sensitive discussion. I know we did a poor job of elaborating on that on stage, and as the guy moving the discussion along at the Q&A, I’m really sorry for that.

With that bit of clarification, if one was being generous, they could argue that Krahulik meant that continuing to keep the Dickwolf Debacle current in the public eye by removing the merchandise so publicly was an ignominious capper to a poorly handled reaction. However, what is and has been infuriating to so many people is that what they wanted to hear Krahulik—or anyone at Penny Arcade, really—say was that making the merchandise to begin with was the mistake, as was their somewhat condescending response to the critics of the original comic.

The Mike Krahulik who wrote, “I also plan to keep interacting with people on a personal level and I understand that will be an ongoing process”? They want to hear more from that guy, because he seems to be learning a lot about how the world outside his personal view works. After all, that same guy had never played D&D before, and then when he had a chance to learn about it, he created wacky, fun, and imaginative sessions for his own sessions as a Dungeon Master. Think about how much more awesome things could come out of his continued education about things he’s never experienced or known about before.

Having seen the entire interview, too, I found something else that’s rather fascinating. Starting from the Dickwolves Debacle and proceeding from there, it appears as if there may have been an evolution in the thought processes going on within Mike Krahulik.

Witness this exchange near the very beginning of the interview:

Khoo: I want to know about money. Money and success. We’ve done pretty well for ourselves, and know that for instance that Jerry loves to save a lot of money…
[Mike laughs]
Khoo: And I know that Michael loves to spend it.
[More laughter, from audience and Mike]
Krahulik: [nervous laughter] Okay…
Khoo: Like I said, these are questions that only I could really ask you guys.
Krahulik: Yeah, if someone else asked me that, I would tell them to fuck off.

In this context, it’s clear that Krahulik knows that some of his habits could be seen as socially inappropriate. Towards the end of the interview, he even addresses his habit of trolling people and the trouble that has come out as a result:

Krahulik: The only thing I guess I can see going forward that could cause conflict between us [as business partners] is probably the stuff that has done it before, which is me not being able to keep my mouth shut. I’m trying very hard to be better about that. And the most recent incident has most definitely taught me some lessons…
Holkins: [Interrupting] About my mouth…
Krahulik: [Overlapping] About my mouth…
Holkins: How big it is—
Krahulik: How it should be opened or closed, when and where it’s okay to say the things that I think. When I do things or say things that hurt not just me but 14 other people who rely on Penny Arcade for their livelihood because I say something dumb to make somebody mad, that I can see possibly happening again. I hope it doesn’t, but I know who I am.

At the same time, it doesn’t seem like Krahulik wants to take any further responsibility towards making any changes in himself for the positive, as seen in this response to a question about his status as a role model for young cartoonists:

Krahulik: Penny Arcade has gotten so big that we could never be what everybody wants us to be.

While I agree with the sentiment that we as an audience could never expect Penny Arcade or its creators to be perfectly representative or reflective of our own voices and views, at the same time, it’s disingenuous for them to refuse to acknowledge that the same behavior that helped them become a success is beginning to be a detriment.

When it comes to “fixing” this problem of theirs, it seems to me that in addition choosing not to engage hyperbolic critics via Twitter or any other social media when people have reactions to things he says or does, in addition to continuing to try and learn more about why people are enraged by things he says or does, in addition to the medications he’s taking for his anxiety and compulsions, Krahulik might be able to adjust or attune his instincts towards instant rage and/or inappropriate remarks through talk therapy. He might be able to better understand why he becomes instantly defensive, and how to better communicate his hurt emotions so that rather than fostering resentment, he is able to create a space of mutual understanding.

This is something that’s helped me out a lot; I hope it would be able to help him, too. If not for himself, then I think that he really needs to address this before his sons grow up to be the same kind of young men that he used to be by modeling his own behavior.

Alternately, they could do what was hinted at (in jest) near the beginning of the panel, helpfully re-created by myself: 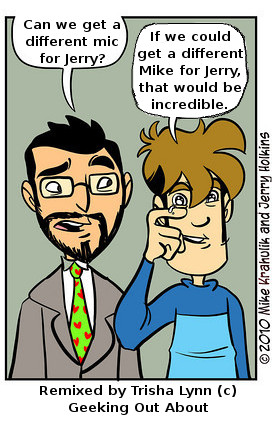 Update: Mike Krahulik clarified his position in this post:

So let me start by saying I like the Dickwolves strip. I think it’s a strong comic and I still think the joke is funny. Would we make that strip today? Knowing what we know now and seeing how it hurt people, no. We wouldn’t. But at the time, it seemed pretty benign. With that said I absolutely regret everything we did after that comic. I regret the follow up strip, I regret making the merchandise, I regret pulling the merchandise and I regret being such an asshole on twitter to people who were upset. [emphasis mine]

Everything we did after that initial comic strip was a mistake and I regret all of it.

2 thoughts on “Trisha’s Take: The next step in fixing the “Mike Krahulik Problem” at Penny Arcade”