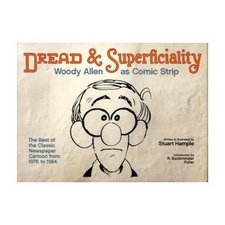 Last Sunday, a humorist and cartoonist named Stuart Hample died. He was 84, and according to the obituary that ran in the New York Times, it was due to cancer.

Perusing the obituary, the thing that jumped out at me the most is that Hample collaborated with famed New York director Woody Allen on a comics strip:

From 1976 to 1984 [Hample] wrote and illustrated the syndicated comic strip “Inside Woody Allen,” a series of panels that purported to reveal the mind of that famous comedian and film director in all its self-analytical, overly worried, oversexed, death-obsessed glory. (Early on he used the pen name Joe Marthen.) Mr. Allen gave his permission for the strip and consulted with Mr. Hample frequently. A collection of selected strips was published as a book, Dread & Superficiality, last fall.

I know of Hample’s work through his son Zack who runs a writer’s group in New York City which has a roving meeting location. And all at once, I am saddened that I didn’t know about Stuart Hample’s work sooner. It makes me wonder about all the other cartoonists and “lost” projects out there which didn’t get to be seen by a wider audience or enjoy the kind of fame which comes from having a celebrity tie-in.

A more in-depth explanation of his comics-cred can be found via the Comics Reporter obit.

In any case, rest in peace, Mr. Hample, and my thoughts are with your family right now.