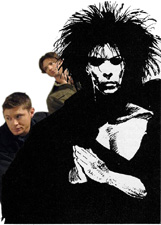 If you’re a fan of British author Neil Gaiman’s former monthly comics series Sandman and have always wanted to see a live-action version, then The Hollywood Reporter has news for you.

Over at their Heat Vision blog, reporters Borys Kit and James Hibberd broke the exclusive news that Warner Bros. TV is “in the midst of acquiring television rights from sister company DC Entertainment and in talks with several writer-producers about adapting the 1990s comic. At the top of the list is Eric Kripke, creator of the CW’s horror-tinged ‘Supernatural.'”

That howl you heard around 6 pm Pacific, by the way? Was the wailing and gnashing of teeth of many a mature female comics fan who knows and loves both Sandman and “Supernatural” and knows exactly how Kripke could possibly fuck it all up.

The bit of good news from the blog that all fans are holding onto lies in these two sentences from Kit and Hibberd:

[Neil Gaiman] is not involved in the new developments, though since it is early in the process, that may change. In fact, securing Gaiman will prove key for the project to go forward.

Gaiman, who is currently in the U.K. taking care of business related to his upcoming “Doctor Who” episode, didn’t comment on his Twitter account when the news broke here in the U.S. because he was on a Skype call to the Melbourne Writer Fest in Australia as one of their events. (Damn, don’t you love technology, these days?)